We’ve had an unusually warm winter this year.

Not at all like the winter in 2014 which was punctuated by several deep freeze days and one giant “Snowmeggedon” that resulted in hundreds of people trapped in cars, at work or in schools.

But there are other things that strike a chord in my heart and make me feel like I’m reliving that January through April.

Lots of rain-both here and at my parents’ place in Florida.  A few days before Dominic left us, I sent him a photo of his younger brother nearly knee deep in creek water that had spilled from the banks into a nearby field.  He couldn’t believe it!  I still have the texts. 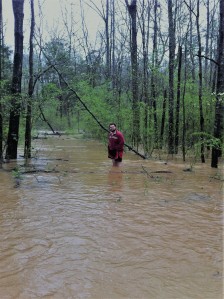 As for my parents’ home-well the rain has already filled the ponds which have risen across some spots in the dirt road that connects them to everywhere.  In 2014, the water got so high they were forced to evacuate for months as travel became nearly impossible except for lifted trucks or tractors.  It probably won’t reach that state again since dirt has been added to the road bed but it’s coming awful close and that taps memories and feelings in ways it’s hard to explain.

The year Dominic left us was going to be a year full of celebrations, culminations and hearty parties.  Julian was graduating with a Business Management degree, James Michael was wrapping up Veterinary School, Dominic would have survived the first two years of Law School with relatively easy classes left, Fiona was advancing in her Masters of Public Health Degree and James Michael and Lillie were getting married.

We thought all we’d need to “survive” that year was a cold winter and wet spring.

This year is another year of celebration:  Fiona is marrying Brandon.  James Michael is coming home from deployment and will welcome, along with Lillie, his first child.  My husband will retire.

And all the preparation, along with the rain, is making me anxious.

I wish it didn’t.

Something about the timing, the temperature, the smell of green grass growing and leaves unfurling just overwhelms my heart.

I’m so much better at planning now than I was just a year ago.  I can think more clearly, work more consistently, stay on track and make progress much better than those first years after Dominic ran ahead.

I have notebooks stacked on my table, decorations stacked in the room that used to be Dom’s.  Plastic bins full of tidbits we’ll use for the wedding and bridal showers.  My dress is sleeved in plastic and hung on the door for safe keeping.

But once you’ve made big plans and had them shattered in an instant, once you’ve looked far forward to exciting times and had dancing turned to mourning, once you’ve done all the right things to make everything right and it’s gone all wrong-well, you just can’t shake the feeling that it might happen again.

I’m working hard to throw off the mantle of hesitation and anxiety that threatens to weigh me down.

I’m doing everything I can to remind my heart that this is an entirely different year, these are completely different celebrations.

Some days I am really good at it.

Others, not so much.

But I AM looking forward to all the beautiful things on my calendar.

Spring is the year’s promise. 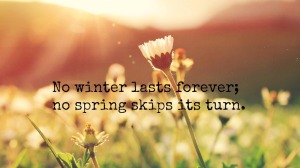