Raising four kids as critical thinkers and encouraging debate led to many, many long discussions about thorny theological, social and family issues.

As my children aged, grew, had more exposure to different people, places and philosophies, the discussions grew more complex and wide-ranging.

It was no longer enough for them that a particular point of view was MY opinion-they began to demand facts, figures, examples, references  and consistent logic.

I remember a particularly good but also frustrating encounter with Dominic when he was about 12 or 13.  As a middle child (third of four) and middle son (second of three), something happened where he felt overlooked, underrepresented and left out or cheated.

So he challenged me regarding whether or not his treatment was “fair”.

I honestly don’t even remember what he wanted to do or wanted to be excused from doing, but I do remember he was passionate about what he believed were different standards applied to HIM versus his brothers and sister.

I spent well over an hour exploring the concept of “fairness”-pulling out my best mom arguments that if we want every single thing to be exactly even then it doesn’t serve anyone well because sometimes one family member needs more grace or freedom or material resources and on another day it may be someone else.

He would not budge.

He wanted every sort of pie in our home to be measured, cut and divided in perfect portions-precisely fair regardless of need. 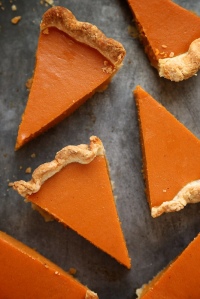 There was no way to convince him that while this might be good for him one day, it might be awful another day when HE was the one who needed a little extra whatever (money, grace, clothes, rest or freedom).

It ended with him deciding I was unfair and he was given the short end of the stick most, if not all, the time.

Every morning I lean over to add food to the cat’s bowl which rests precisely where he stood when he was arguing with me.  So I’ve thought about that conversation often in these years since he left us.

And while I was on the side of accepting that things/life/situations are inherently unfair when arguing with Dominic, I now find myself on the side of lamenting the very thing I was willing to accept then. 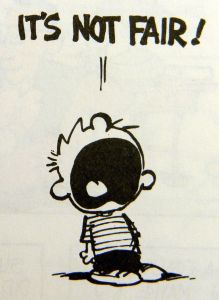 Because one of the things I’m learning this side of burying my precious child is that there is no upper limit to the sorrow and pain I may have to carry in this life.  And it’s no use comparing my burden to that of another-begging God to consider the differing weights and to make adjustments to lighten my load because it is heavier than that of another.

I do not get a pass on daily stress and strain.

I am just as likely as anyone else to get the grumpy cashier, to drop a dish or lose my keys.

I cannot point to a single stretch of more than three days when one or more minor (often major) disruptions, problems or just stinky situations weren’t piled on top of missing my son.

I can sit and soak and sour in my feeling that this is “unfair”.  I can allow my heart to become bitter because “other people have it better, or easier or have more”.

But all that does is ruin MY day, hurt MY heart, stop me from living MY life.

Life is NOT fair.

If they were, my burden might very well be greater instead of less.

And if  I take a moment to consider the overall sweep of my life, then I have to admit that I am, in fact, blessed.

I had my son for nearly 24 years and nothing can take away those sweet memories and the light and life I carry inside my heart because of that.

So I will use my mom voice and remind myself that life isn’t fair,

but that doesn’t mean it’s not good.

15 thoughts on “Life is Absolutely NOT Fair”

Leave a Reply to my one life. today Cancel reply