Today is 35 months-almost three years since I was awakened to the news no parent wants to hear.

And, yes, I still count the months.

Every 12th rolls around and reminds me that while Dominic’s leaving was an event on the calendar to others, it is an ongoing experience for me and my family.

I don’t say this for pity’s sake.

Pity is a poor substitute for what I really want:  I want my son back; my family whole; my world unshattered and unshaken; my biggest problem to be how to get all my grown children together at the same place at the same time for holidays.

I can’t have what I really want.

So I hold on to what I have-the Truth that every promise of God in Christ is “yes” and “amen”.  And the memories-I hold onto the memories.

I have the first Bible we ever gave Dominic.

It endured rough use-the corners chewed on, the pages bent and the covers full of creases where they’ve been folded back and forth.

We chose it because it is one of those children’s Bibles with pictures inserted every so often-old fashioned images taken from paintings no longer guarded by copyright or trusts.

His very favorite page was the illustration of David and Goliath-his most treasured story and his most requested reading.

We even had a “David and Goliath” themed birthday party way before Pinterest.

I made a life-sized version of Goliath and hung him on the wall so the boys could stand next to it for a photo.

I was recently reminded of these memories when a video made it’s rounds on Facebook (you can watch it here ).

It’s easy to focus on the fact that David’s stone slew the giant.  But what my heart holds onto are David’s words, “All those gathered here will know that it is not by sword or spear that the Lord saves; for the battle is the Lord’s, and he will give all of you into our hands.” (I Samuel 17:47) 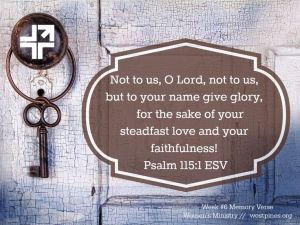 David had little confidence in his own strength. He wasn’t certain that his skill in slinging rocks was what guaranteed victory.  No.  He was absolutely convinced that Jehovah would not allow His Name to be sullied.  He rested in the fact of God’s faithful covenantal love.

He bet his life on it.

If you read the Old Testament you will find example after example of God’s people begging Him for mercy-not because they deserve it-but because it reflects the truth of Who He is.

Abraham leads Isaac up the mountain and tells his servant, “We will return”.

Because he trusted that God’s promises were true, that God could not and would not lie.

Moses begs God to give the Israelites another chance because if they perished, it would desecrate His Name.

On and on and on.

So in this Valley of the Shadow of Death, I don’t beg for mercy and grace because I think  I DESERVE it.

I beg for mercy and grace because the character of God guarantees it.

God will finish what He started-not for me but for His kingdom.

His faithful love endures forever not because I am worthy but because He has claimed me for His own.

He will not allow His Name to be defamed.

I bet my life on it.