I’ve heard it from more than one bereaved parent.

I’ve thought it myself.

“Is God punishing me?”

Have I done something so terrible that it falls outside the grace and mercy of the God Who sent His Son and so I must pay for it with my own child?

I’ve heard it from more than one bereaved parent.

I’ve thought it myself.

“Is God punishing me?”

Have I done something so terrible that it falls outside the grace and mercy of the God Who sent His Son and so I must pay for it with my own child?

My heart strains to make sense of things that don’t make sense and I sometimes reach for any explanation no matter how far-fetched or theologically inaccurate.

Because truly, child loss is sometimes only the beginning of the pain and sorrow and ongoing drama and trial.   Since Dominic ran ahead to Heaven, many, many things have gone wrong.

Many,  many things have been hard.

After Dominic left, life just piled on like that childhood game where one person held the ball and everyone else tried to get it.

I woke up every day expecting another blow and it nearly always came.

I remember begging God to simply make it stop!

So I began to wonder if I was being punished.  What other explanation could there be?  If God was allowing all these hard things, it must be because I owed Him something.  I hadn’t done enough or wasn’t doing enough.  My spiritual discipline was lagging behind.

Somewhere, somehow I was falling down in my faith.

But those thoughts weren’t placed in my head by God.  They were fiery darts of the enemy of my soul trying his best to make me doubt and turn away from the Source of my hope.

God is not punishing me.

He made provision for all the punishment required when He sent His Son as a complete, perfect and sufficient sacrifice for sin.

My Heavenly Father is a good and loving God Who did not leave it to me (or you, or anyone else) to square that debt.  Because it is impossible for us to do it.  Even all the pain I’ve borne is insufficient to pay it.

Jesus paid it ALL.  The debt is no longer outstanding. 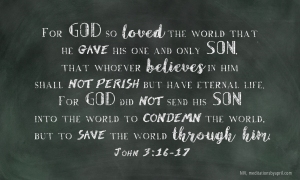 Now, I may very well (and often do!) have to reap the natural consequences of my own or other peoples’ sin.

But that is very different than thinking God is doing me harm for the purpose of punishment.

We live in a fallen world where things do not work as God originally intended.  Human hearts are callous at best and evil at worst and we do things to one another that should never be done.  Sickness, disease and accidents happen.

Sometimes all these things happen at once.

God can and does intervene.  Sometimes He doesn’t.  I don’t know why in one case and not in another.  That is His wisdom and purpose and beyond my understanding.

But I know that He is not punishing me nor is He punishing you.

Jesus Himself suffered greatly in His earthly life, yet never sinned.

That made His sacrifice the perfect, complete and utterly final payment for my own sin debt.   Having received the gift of redemption by His blood, my life is free to be offered back to God as a sacrifice of worship, reverence and faithful obedience.

But it is not required as payment for sin.

Neither was my son’s. 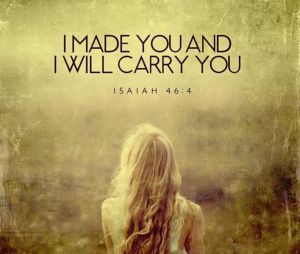