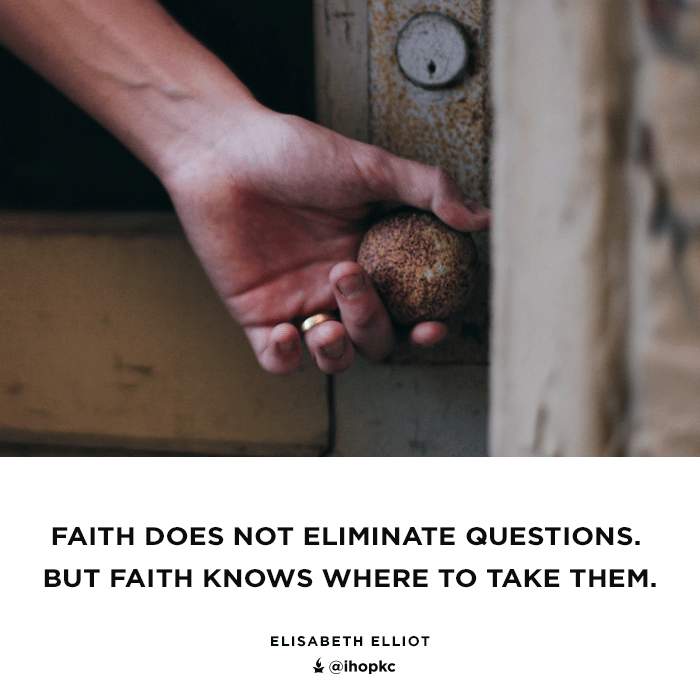 The opposite of faith isn’t doubt, it’s certainty.

Somewhere in the pursuit of truth and light, the Protestant reformation embraced at least one of the very practices it sought to discard.

I absolutely believe that by the time Martin Luther tacked his theses to the door the church needed reforming.

Men’s traditions and human “wisdom” had adulterated the pure truth and freedom of Christ’s Good News. No longer a source of liberation, it had been transformed by those in power into a form of bondage.

But humans are a stubborn and prideful lot and it wasn’t long before the liberators became slave drivers.

“Sola Scriptura” didn’t allow for any deviation from the accepted interpretation of those Scriptures. And the interpretation often went past the text and included making absolute assertions about how God works in the world.

Men began to once again place God in a box.

My intentions are not always yours,

and I do not go about things as you do.

9     My thoughts and My ways are above and beyond you,

just as heaven is far from your reach here on earth.

So much of the “faith” handed down today through Sunday School lessons and sermons is one that simply doesn’t leave room for mystery or for doubt or, honestly, for many of the actual Bible stories if you read them straight from the Book and not get them second hand from a loose retelling .

Jesus Himself-the exact representation of the Father (Hebrews 1:3)-didn’t greet skeptics with absolute proof. He pointed to the work He was doing, the truth He was telling and the miracles He performed but He left it to the audience to decide if that qualified Him as the Christ.

Yet we treat those who bring questions to the table of grace at best as immature and at worst as apostates or faithless wannabes.

How far we have fallen from Paul’s declaration: “We walk by faith and not by sight.” (2 Corinthians 5:7)

Worse, we often condemn those who want desperately to come trembling to their church to seek other people and spaces outside the community of faith where their questions will be tolerated.

I love how Philip Yancey spoke of this in a recent blog titled, “A Time To Doubt”:

Jesus had the opportunity to subdue doubts for all time. He could have appeared with a choir of angels on Pilate’s porch the Monday after his resurrection and triumphantly declared, “I’m back!” Or, he could have staged a spectacular display before thousands in the Roman Forum. Instead, he limited his appearances to small groups of people who had already demonstrated some faith in him—which tells me something about the kind of uncoerced faith that God values.

In one of those small gatherings, the apostle who would earn the nickname “doubting Thomas” confronted Jesus. I love that scene, for two reasons. First, it shows the gentle way Jesus treated a doubter, when he had a perfect chance to scold him or pile on the guilt. Listen to Jesus’ approach: “What proof do you need, Thomas? Want to touch my wounds? Shall I eat something for you?”

Second, I note the poignant fact that the other disciples, who had already encountered the risen Jesus, included Thomas in their midst. To them, Thomas was a heretic: he defiantly refused to believe in the Resurrection, the cornerstone of Christian faith. Even so, they welcomed him to join them behind closed doors. Had they not, Thomas may never have met the resurrected Jesus.

Perhaps that gives a model for how the church should handle doubters now. Can we provide a safe, welcoming place for those who need more light?

Philip Yancey, “A Time to Doubt”

I know so, so many people who suffer greatly-often through no fault of their own and sometimes due to the fault and sin of others-who struggle to square their experience with all the declarations they’ve heard about “how God works”.

I know others who have crossed every “t” and dotted every “i” on the long list of “what good Christians do and God rewards” and are living a life of desperation and sadness because life hasn’t turned out anything like what they thought they were promised.

Is it any wonder they are trying to figure things out?

Doubt is not denial.

If someone is asking questions, they are still seeking.

John Drummond points out that Jesus consistently made a distinction between doubt and unbelief. “Doubt is can’t believe; unbelief is won’t believe. Doubt is honesty; unbelief is obstinacy. Doubt is looking for light; unbelief is content with darkness.” (quoted by Philip Yancey, A Time to Doubt)

He only chastised the religious leaders who thought they knew it all.

Perhaps we could do the same and make space for those who are walking through a desert place to refresh themselves, renew their hope and restore their faith.

**If anyone is honestly searching, they are welcome to use the “contact” option to send me an email and begin a dialogue. ❤**

One thought on “The Opposite of Faith Isn’t Doubt”