A few times in my life I’ve been utterly overwhelmed by an outpouring of God’s grace and mercy.

And like David who danced before the Lord when the Ark was returned to Jerusalem, I simply can’t contain myself. I want to move my body in response to the rhythm of the good news.

So I understand Mary’s response to Elizabeth’s blessing:

I’m bursting with God-news;
I’m dancing the song of my Savior God.
God took one good look at me, and look what happened—
I’m the most fortunate woman on earth!
What God has done for me will never be forgotten,
the God whose very name is holy, set apart from all others.
His mercy flows in wave after wave
on those who are in awe before him.
He bared his arm and showed his strength,
scattered the bluffing braggarts.
He knocked tyrants off their high horses,
pulled victims out of the mud.
The starving poor sat down to a banquet;
the callous rich were left out in the cold.
He embraced his chosen child, Israel;
he remembered and piled on the mercies, piled them high.
It’s exactly what he promised,
beginning with Abraham and right up to now.

56 Mary stayed with Elizabeth for three months and then went back to her own home. Luke 1:46-56 MSG

Known as The Magnificat, Mary’s heartfelt response to the work God was doing in and through her is a perfect introduction into the upside down Kingdom Christ came to establish.

The Jews were under occupation, under the thumb of a pagan Roman government where might made right and the outcast poor had no hope for justice.

But the Holy Spirit revealed to Mary how very great was this Good News-no longer would evil reign nor the wicked rule. God’s mercy would be supreme! His people would be blessed and every single promise of the Lord would be fulfilled.

So she danced to the tune of salvation. Even though the music was faint and far away.

I’m invited to dance to the same song because God’s promises are sure.

Sometimes I have to strain to hear the music.

But if I lean in and listen closely, it’s there.

Father God, You never fail. Your purposes are sure and cannot be thwarted. You will not allow injustice to rule forever. You sent your Son to set the record straight, to pay the price and to squash evil tyranny.

It’s true that He has not yet established His Kingdom in its fullness. But the enemy doesn’t stand a chance. The devil is on the defensive and we are guaranteed victory.

Help me hold on to the fullness of the gospel message-not only that my eternal hope is secure (and those I love who have received salvation through Christ) but that You are working in and through your people to restore justice and equity in the world right now.

Make me an instrument of your peace. Give me words of hope to share with a frightened and confused world. Let me lead others in the dance of my Savior.

I don’t know about you, but sometimes cute little memes intended to help me “look on the bright side” fly all over me.

Sure, if life gives you lemons (bad hair day, late to work, long line at the grocery store) make lemonade.

But sometimes it’s not lemons life gives you, it’s an avalanche of pain, heartache and world-shattering awful.

You can’t make lemonade from THAT.

So often life is absolutely NOT the party I had hoped for. And all the catchy psychobabble parading across my social media newsfeed doesn’t make it any easier to take.

This sweet little picture did though.

There are days when I just can’t. And that’s OK.

But when I stop to listen, even on the hardest days, there’s still sweet music in the distance. ❤️ 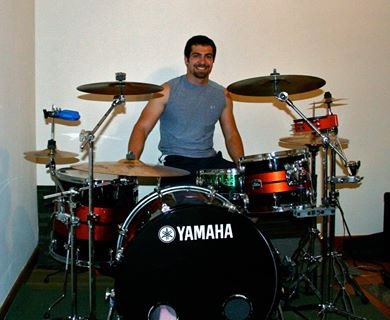 Counselors tell the bereaved that grief will change them.

They readily acknowledge that life after loss will never be the same as it was before death entered our world.  But they encourage us that there will be a “new normal”–different, yes,  but some kind of settled pattern that we can count on.

I’m not sure when this is supposed to happen.

Every day I feel out out of balance, off-kilter and have to scramble to catch up to the clock ticking off the hours.  I can’t find the pattern, the beat…

Grief sways to a rhythm of its own.

I step on my own toes trying to keep up and find that often I fall flat on my face.

When Dominic applied to the University of Alabama Law School, he had to submit a personal statement.  The idea was to give the selection committee insight into intangibles that might make a prospective student a good candidate for the program.

Dominic wrote about being a drummer.

He made the case that percussion is the heartbeat of music.  It marks the pace, leads the way.  If a drummer misses a beat, it can throw the whole band into confusion.

My life as a bereaved mother feels like music that can’t find its way.

There is melody and harmony and sometimes sweet singing–but I can’t discern a rhythm and I don’t know where it’s going. Discord clangs loudly in the background.

These years were supposed to be the ones where I swayed instinctively in well-worn paths to familiar tunes.

Not ones in which I had to learn a brand new step to a song I don’t even like.

I don’t have the option to request a different tune, so I do my best to keep moving to this broken beat.